On All Hallow’s Eve, when the ghosties dance ’round,

And Witches their broomsticks do fly ‘cross the moon,

Hide ‘neath your covers and don’t make a sound

The wind’ll start howling.  The trees crack and groan.

The rattle of chains’ll be heard from above.

Creaks from the hinges say you’re not alone.

Then suddenly–you’ll feel the touch of a glove.

Your skin will shrink from the start of that touch.

Your knees, they will shake.  Your heart, it will quake.

You’ll start to fear that the scare is too much,

When glad laughter will the fright from you take.

When was the last time you took a risk of faith?  What did it look like?  Was it worth the effort?  I’ll bet if it truly was led by faith, you’d have to say it was.

But what has happened since?  Did you use your momentum to keep going?  Did you “live well” ever after?  Were you healed of your plague?

Those are some serious questions.  And since I’m right in the middle of one of those risky times, I can’t really answer them all with absolute assurance.  But I’m thankful for the heads up this story has given me, and I have every intention to keep moving forward in the strength I have.  I really do want to “live well, live blessed!”  I really do want to be healed of my plague—or plagues.  (I can be a real mess sometimes.)

I know.  The previous paragraph contains a lot of hedging words in it.  “I can’t really answer with absolute assurance.”  “I have every intention …”  “I really do want …”  Ugh.  Wishy washiness all over the place.  As Jesus so often asked those who came to him, “Do you want to be healed?”

Yes!  I really do, and the woman in this story really did!  She had suffered for twelve years as an “unclean” member of her society.  She had lost all her money paying for treatments that had left her “worse off than before.”  This was her last shot, and she wasn’t going to waste it.  She believed that if she could only “put a finger on his robe” that she could get well.  So she took her chance.  She shoved through the crowd, an untouchable among the clean, and dared to touch the Most Clean, the Most Holy God.  That very moment she knew that she was healed.  “She could feel the change.”

And Jesus felt it, too.  Power had gone out from him to the woman, and he turned to find her in the crowd.

She hadn’t asked for personal attention.  In fact, she dreaded disclosure.  But he looked for her, and she decided to spill the beans.  In fear and trembling and on bent knee, she told him her story.

And he blessed her for it!  He called her “daughter.”  He applauded her daring faith.  And he left her with a powerful benediction:  “Live well, live blessed!  Be healed of your plague.”

And I can do the same.  I can live well because I, too, am a daughter of the King.  I am already so abundantly and undeservedly blessed that I certainly can start living that way.  And, I, too, am healed of my plague—the sins of omission and commission that kept me feeling unfit for service.  I can feel the change.  I am healed and whole in Christ.

“A farmer planted seed.  As he scattered the seed, some of it fell on the road and birds ate it.  Some fell in the gravel; it sprouted quickly but didn’t put down roots … so it withered.   Some fell in the weeds … and nothing came of it.  Some fell on good earth and came up with a flourish, producing a harvest exceeding his wildest dreams.”  (Mark 4:3-8).

My routine has been disrupted this week.  My sweet friends who usually walk with me in the mornings have been unable to go and that has left me without the motivation I need to get moving.  I’ve lingered too long over my morning coffee, watched too much tv,  and dragged through my day without structure.  Who knew this morning habit had become so important?

Obviously, God did, and that’s why he’s gotten my attention with this familiar story.  So many times I have misread this tale.  Even with Jesus’ careful explanation attached, I have assumed no responsibility for the harvest in my own life.  The randomness of the sowing always seemed to imply that I had no control, but every gardener knows that is not the case.  Soil can be tended.  It can be prepared for the seed.  And that is the message I needed to learn this week.

You see, it’s amazing how many weeds can grow in a week.  Worries about all the things I have to do and all the goals I need to accomplish.  Anxiety over the tasks I haven’t completed and the chores I’ve pushed aside.  In just one week, stress can nearly strangle the seedlings of hope that have been growing in my heart.

That’s why discipline is so important.  Careful tending of the seed.  Fastidious weeding of the soil.  Deliberate removal of the rocks.  And generous watering with the Living Water of God’s Word.  Time well spent with intentional effort toward the good harvest.

And that is the lesson this week of aimless living has taught me.  I do have a responsibility for the harvest, a responsibility to prepare good soil that embraces the Word with a flourish of growth.  I want a harvest exceeding my wildest dreams! 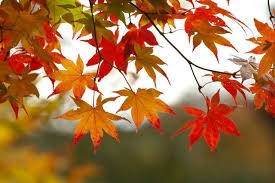 “I’ve come to cut … through these cozy domestic arrangements and free you for God. … If you don’t go all the way with me, through thick and thin, you don’t deserve me.  If your first concern is to look after yourself, you’ll never find yourself.  But if you forget about yourself and look to me, you’ll find both yourself and me.”  (Matt. 10:34-39, MSG)

In just a few weeks from now, the trees will be bare having let go of their colorful display and looking for all the world like brittle, dead sticks.   But appearances can be deceiving.  If you’ve lived more than one year on this planet, you know that the tender beauty of spring will be here before you know it restoring the colors of life and releasing buds into delicate new growth that will one day fall to the ground.

That’s just the way it works.  The old makes way for the new, and the new blossoms in the freedom of open limbs.  Free to grow, to mature, and to let go of anything that stands in the way of the ever-expanding kingdom of God.

What if this year’s leaves refused to fall?  What if they hung on for dear life and dug their crispy pointy fingers into the limbs of last year’s growth protesting their death and forbidding any movement toward the changing of the seasons.  What a mess that would be–stink and mildew fighting for a place in and among the fresh green growth–death striving for a place among the living.  Ridiculous!

And so I’m learning to let go.  To let old names fall to the ground.  Names like Successful, Achiever, World Pleaser, and Praise Getter.  For a time I may look bare–naked and gray, without color or promise.  But I know that spring is coming.  I feel new buds itching to pop out into pinks and whites and yellows.  Not quite yet, but very, very soon.

And so I must let go.  Of “cozy domestic arrangements,” of relationships that hold me back, of self-conscious concerns that blind me to God’s pathway.  It’s time to go all the way.  Finally to forget myself and to find instead both God and me.  I won’t lose out on a thing! (Matt. 10:42) 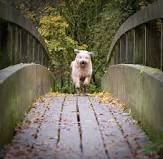 It’s been a week of great change.  Summer finally gave way to autumn.  We rescued two dogs–more on that later.  We invited my mother to live with us, and she accepted.  And I attended a writer’s workshop that caused me to change the way I look at things.  All in all, everything around here is a little bit unsettled.  But in very good ways.

I’ve written earlier posts about the changes Chuck and I have made in our activity level.  And this weekend was no exception.  On Sunday afternoon, we decided to ride our bikes to the Kents’ house just to say hi and to get a few more miles under our belt before we join the Ride for Refuge later this month.  On the way there, we were joined by a feisty and fast beagle pup who refused to let us pass her up.  That may not have been a bad deal since we found her where people frequently dump their dogs, we had lost our dear lab, Mary, early in the summer, and I have been feeling the urge to get a new companion.  The problem was that I had just gone to the shelter the day before and picked up our new BFF, Dottie.  What were we going to do with two dogs?

We couldn’t just turn her away.  She had run over six miles to stay with us.  But I knew that Chuck would never agree to keeping two dogs–both young and very rambunctious.  So as we got closer to home, I was secretly fretting as I huffed up the hills.  You could have knocked me over when Chuck said, “I think ‘Beaglejuice’ is John and Sarah’s dog!”

John and Sarah are engaged, but they won’t be getting married until next June.  Which means–yes, you got it–we now have two puppies vying for our attention until then.  Sarah and John (when he’s here) are trying hard to be good “parents” to Daisy (not ‘Beaglejuice’ to Chuck’s dismay), but life has definitely changed around here.

At least the addition of my mom won’t be such a rowdy change.  I love having her around, and she loves the craziness of our revolving door family.  Like the dogs, she will be a joy–but unlike them, she will also be a great help to me.

And the final big change has been wrought in me.  While attending 48Days’ “Write to the Bank” workshop, I felt the earth move.  Not an earthquake, but a paradigm shift.  A long anticipated settling in to who God has made me to be and a calm reassurance to, like Gideon, “Go in the strength I have.”  Finally, hopefully, I really believe that God is sending me.

So here I go.  Accepting the good things that come my way along with the risks and challenges they bring.  Oh God, help my unbelief and keep me moving forward in the strength I have!